A path leads from Kokopelli cave to the parking area above.

During our vacation to the Four Corners area, Doc and I spent one night in Kokopelli’s Cave Bed and Breakfast in Farmington, NM. And what a great time we had!

You start by driving to the owner’s home where they hop into their own vehicle and lead you out of town and down some pretty rough, dirt roads to the edge of a cliff.  From there you have to climb down a long and uneven path that has been cut into the rock.  Anything you take into the cave has to be carried down so we had planned ahead and packed just what we needed for the night into a couple of backpacks. Once you get down to the cave, you don’t want to have to go back to your car. (My photo of the stairs shows only a small portion of the trek).

The owner, Gayle, showed us around the cave, a comfortable, you could even say luxurious home for the night and then she left us to enjoy the quiet, stunning views. 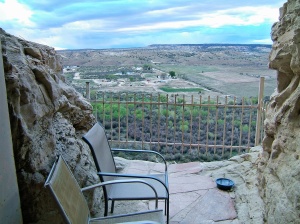 The cave sits high on the side of cliff.  If you’ve ever wondered what kind of view the cliff dwellers saw from their ancient homes in the rocks, this will give you a pretty good idea. 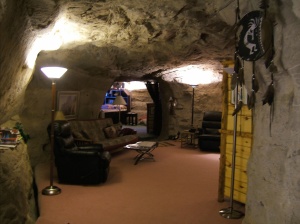 It didn’t take long before a variety of “varmits” heard us moving around and knew that someone was at home. Gayle had warned us not to leave the sliding doors open and I could see why. There, staring at me with his nose pressed against the glass, was a big, fat squirrel. I opened the door and tossed him a few bits of cat food out onto the stone “patio” outside the door. Gayle keeps a plastic tub of cat food next to the door just for that purpose. Within seconds, Mr. Squirrel was joined by several chipmunks who eagerly devoured the kibble and then scratched at the door for more.  After seeing to the nutritional requirements of all the furry “neighbors,” we fixed our own dinner and ate it while watching the sunset.

The cave was much bigger than I expected. And much darker!  The only natural light is what comes through the two sets of sliding glass doors. One at each end of the cave. Luckily there are lots of lamps scattered throughout because the stone seems to suck the light right into itself and it gives back no reflection at all. This cave home was built by a geologist and originally served as his office. Later, he and his wife moved in and lived there for a time. While the cave was a fascinating place to spend a night, I can see why the man who built it eventually wanted to move. It would be uncomfortable living in artificial light all the time.

There is a kitchen/dining area, bathroom, large living room, bedroom and a “kiva.” While the walls and ceiling of the cave are bare stone, the floor is not. It has been slightly raised and carpeted throughout. There was no TV service when we were there but there was a collection of DVD/Videos that you could watch, although we found the scenes outside to be much more interesting.

As it got dark, we noticed something moving around outside the bedroom sliding door. It was an odd looking creature, one we had never seen before. Called a “Ring Tailed Cat” according to the notes written by other guests that we found in a journal in the living room, it appeared to be a member of the raccoon family.

A ringtail cat shows up at Kokopelli Cave once the sun goes down.

Our night at the cave was not to be missed but at $260 a night, it was a splurge for us. I don’t mind an occasional splurge though. A few nights at a cheap Motel 6 will even out the cost of the trip. The most important thing I’ve discovered about spending money on travel is that six months or a year or even 20 years from now, you’ll remember the spectacular things you saw and the marvelous time that you had.  But you’ll never remember what it cost you. (And just so you know, I had to go on-line just now to look up the cave’s nightly rate!).