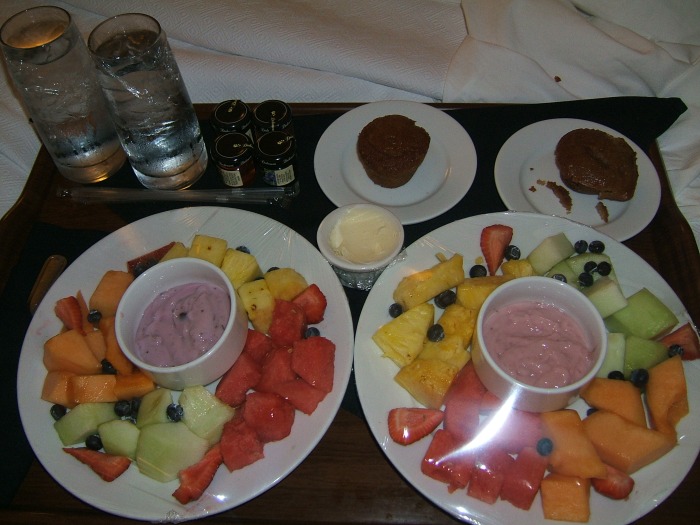 For breakfast Doc and I wanted something light.  We’d been eating so much this week that we were starting to feel overwhelmed by all the food. My feet were still sore and not wanting to walk a single extra step, I opened up the room service menu and ordered us each a fruit plate.They arrived a half hour later on a beautiful mahogany-like tray with linen napkins.  The menu listing of fruit “plate” was misleading.  Fruit “platter” would have better described the morning meal.  In addition to 15 lbs. of melons, pineapple and strawberries, each “platter” came with a large bowl of yogurt and a muffin.  We ate the yogurts, split one plate of fruit, wrapped the second in plastic wrap, and stored it in a bucket of ice for later.  Doc headed downstairs to the conference. I was on my own for a second day.

Despite my feet fiasco I was not about to miss a single day of sightseeing.  I plastered my blisters with moleskins from my blister kit, put on a pair of double layer walking socks and my good walking shoes.  It was the best I could do. 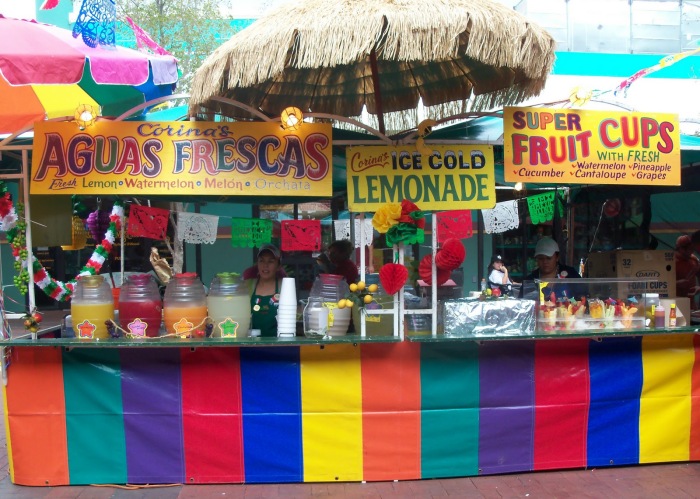 I walked almost a mile to “Market Square” also called the “Mexican Market.” It was still early when I arrived but the shops had begun to open. Two buildings were filled with stalls and shops selling “Mexican” wares, many of them, I strongly suspected, made in China. There was lots of kitschy pottery.  I don’t have any objection to kitsch. I do have an objection to bad kitsch. Many of the shops sold the same things and I found most of the pottery and glass pieces to be downright ugly. 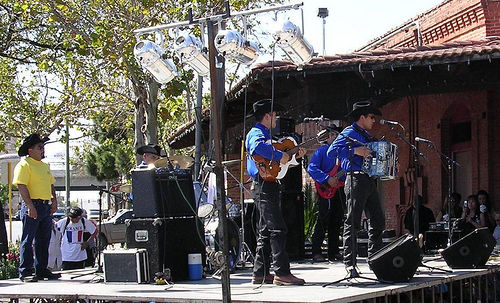 There were a few places selling more unique items. A shop filled with copper. Another owned by a woodworker. A nice leather shop. Nothing was of much interest to me.

Back outside on the main strip, lots of Mexican food stalls were setting up. Now I was interested. The air was beginning to smell like fried onions and spicy peppers. A number of jewelry vendors were tucked in between the food booths, selling lovely, handmade pieces. 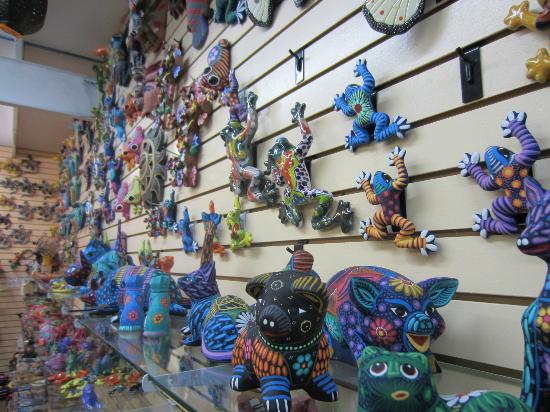 As I walked along, I spotted a woman setting up a table of canvases under a large tent.  I immediately recognized it as a “paint and sip” class.  I approached the woman and asked for details.  This group session was set up by a local franchise called Pinion’s Paint. Everything is supplied except drinks and snacks.  Guests paint a common picture over a period of two to three hours.  It would keep me off my sore feet for a while. I paid the $35 fee and signed up. Twenty two people were registered when the class began twenty minutes later. I sat between a little girl of about 11 or 12 years old and a Latino couple that kept me laughing throughout the morning.  At the first break, I stepped inside a bakery/cafe and bought a slice of freshly baked pineapple strudel.  At the second break I had a lunch of mini chicken tacos with fried onions and guacamole from a nearby Mexican vendor. 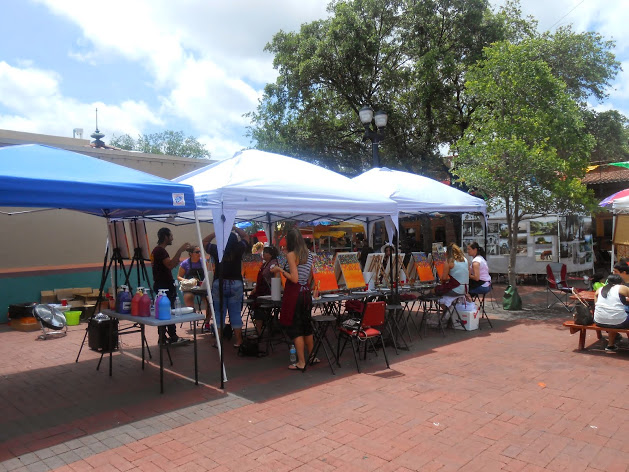 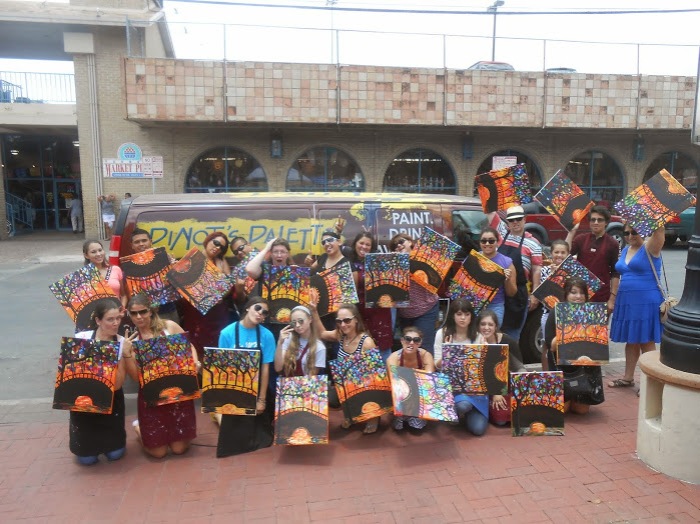 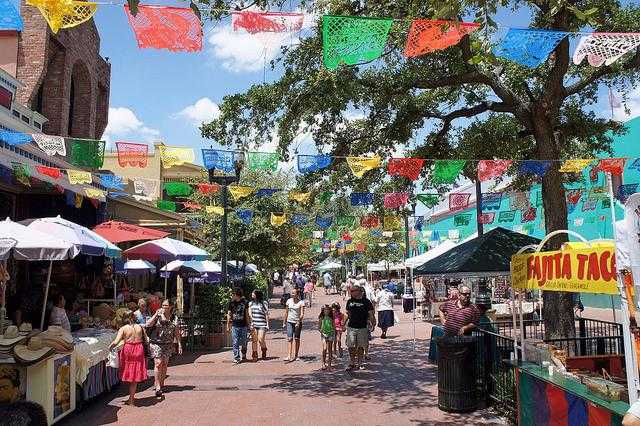 By one o’clock class was over and I began the long walk back to the hotel to drop off my painting.  From there I walked on another 1/2 mile to Alamo plaza to check out the mall and its welcoming air conditioning. Why I thought going to a mall was a good idea… I hate shopping and I especially hate shopping in malls with their cookie cutter chain stores catering to 15 year old shoppers. I found my way through the crowd and downstairs to the Riverwalk level. Once outside, I found a lovely area with tables and chairs and a Peruvian flute band with a guitar and drum, performing.  I bought a drink, sat down, and enjoyed both the music and the people-watching. 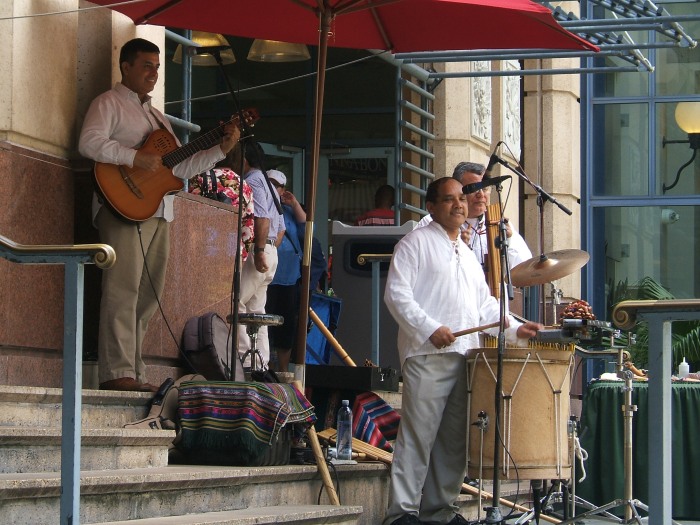 Dinner once again was in the hotel restaurant “Grill 111.”  Always empty whenever I walked by, I’m not sure why this place wasn’t busier. because the food was excellent. Doc and I split the house dinner salad and an order of shrimp fettucini the first evening. The salad was surprisingly large- like everything in Texas – it was more than twice the size of two regular dinner salads and it was scrumptious with dried cranberries, bacon and crumbled cheese.  The shrimp fettucini was spicy with giant, tender shrimp. For our second dinner we again split the house salad and the “wing tip chicken” which turned out to be half a chicken – more than the two of us could eat. Even though we were splitting meals, we were eating an enormous number of calories this week. At least we, or at least I, was getting plenty of exercise.