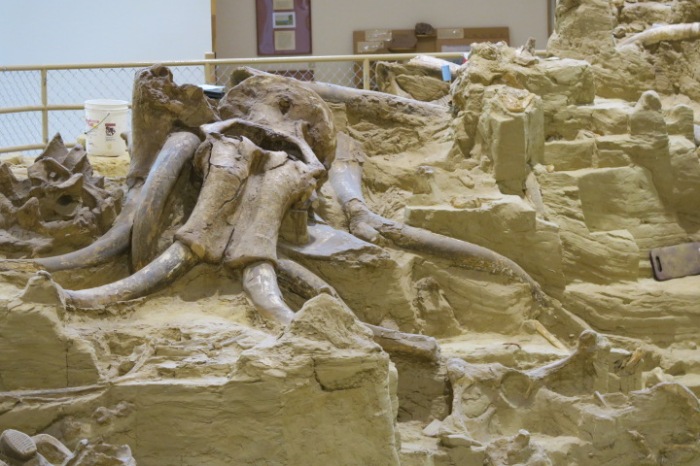 The day starts with an 8:30 a.m. tour at the Mammoth Site in Hot Springs, South Dakota, an archeological dig that yes, would likely bore most of my friends. It’s the sort of place I have always liked though and Doc also enjoys these places of science that I drag  him to. At this early hour, we have the place nearly to ourselves.

Found in the 70’s by a bull dozer driver who was excavating to build a housing development, the site has had a large complex built around it so that it can be worked indoors out of the elements. One other couple arrives and joins our tour which lasts about 30 or 40 minutes. The guide, a student intern, is well-informed. He walks the four of us all around the dig talking about the history and the methods used to excavate the site. Afterwards, we are free to walk around on our own.  There is an exhibit hall with good, informative displays. We are shocked when we realize just how big the Columbian mammoth really was. I snap a picture of Doc standing next to the display that shows the scale of both North American mammoths. We also take an elevator to the basement to watch work being done on newly excavated bones. We stay about an hour and a half and feel like we’ve done the place justice.

From Hot Springs we’re off to the Crazy Horse Memorial.  You can see the head of Crazy Horse along the highway long before you arrive.  The final carving is expected to be four times the size of Mount Rushmore. When we reach the monument we are amazed at the huge complex that has been built here since we last saw the memorial in the early 90’s.

The granite mountain was chosen by Sculptor Korczak Ziolkowski & Lakota Chief Henry Standing Bear for the Crazy Horse Memorial which depicts the Lakota warrior, Crazy Horse, seated on his horse with his outstretched hand over the horse’s head indicating, “My lands are where my dead lie buried,” in response to a cavalry man asking him where his lands are now.

We watch a short movie about the creation of the monument and then wander through the displays of American Indian art and artifacts. 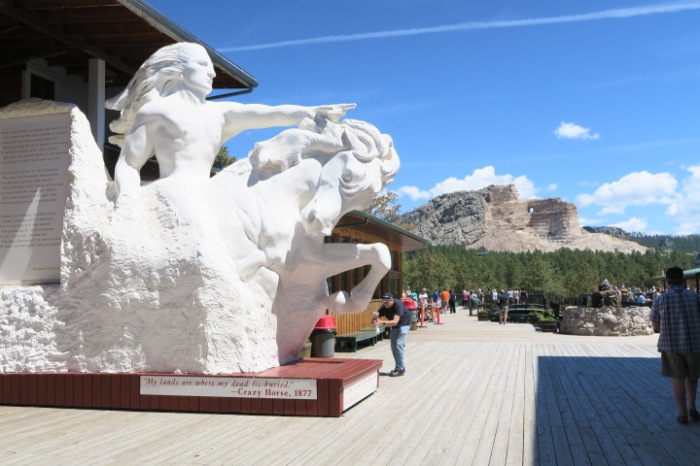 We drive along Iron Mountain Rd. toward Mount Rushmore often getting glimpses of the four presidents through the trees. One lane tunnels frame the heads of the presidents as we pass through. Unfortunately, there is construction along the road.  It doesn’t make the sites any less spectacular but it does back up that traffic so that there is always a line of cars behind us. It makes it difficult to stop along the road for a photo or just a better look. Everyone keeps moving.

Doc decides he wants to visit Mt. Rushmore. It isn’t on our travel plan because we have already been to Mt. Rushmore on our previous Black Hills vacation. But travel plans are designed to be flexible and I always factor in extra hours anyway to allow for changing plans or slow traveling, whether it be the fault of slow traffic or my own puttering ways. A stop at Mt. Rushmore isn’t going to throw the plan off kilter so I reset the GPS. It costs us $11 to park at the popular tourist stop, but otherwise admission is free.

We stop for an ice cream cone. Doc, I have discovered after many years of travel, never met an ice cream shop he didn’t stop that. It makes no difference whether it’s July or January. If there is ice cream in the state he will find it.

The smallest size is two scoops— another example of American portion sizes being out of control.  We explain that we each only want one scoop. The workers aren’t quite sure how to handle that. Doc gets his butter pecan in a cup and I get a cone with mint chocolate chip. The clerks decide to only charge us for one ice cream.

We wander along the flag lined walkway to the monument viewpoint. There’s not a whole lot to do here so I snap a few photos and we’re on our way again.

In Rapid City, we play a round of miniature golf at a place called Pirate’s Cove.  It’s the nicest mini golf course we’ve ever played. The holes aren’t all terribly challenging but some are a little tricky. The course is laid out nicely on a man-made hill of sorts, among flower beds and pirate-themed décor. Every hole starts with a sign giving a bit of pirate trivia. Skeletons are perched overhead in crows nests. There is a waterfall where I almost lose my ball. One of the greens is underneath the waterfall in a large man-made cave. We look through holes in the wall and can see dimly lit pirate skeletons surrounded by their ill-gotten treasure.

I start out at a par 3 hole by scoring an 8. At the next hole, a par 2, I score a 7. This isn’t starting out so well.  Gradually, I make up points by beating Doc at several of the remaining holes, sometimes by just one point. He still beats me, but only by two points. Our final score is 45 to 43. In all our years of vacation golf, I don’t think I’ve ever beat him, not even once. 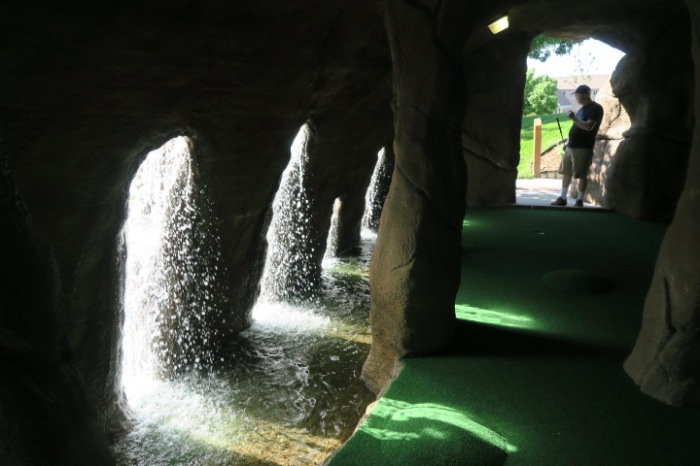 Across the street is a top–rated Vietnamese–Thai restaurant where I have planned to eat dinner. But, because it is Monday and the chef has the day off, they are only serving sandwiches. It’s a big disappointment. I am not doing so well with my restaurant choices on this trip. Note to self: restaurant research is a definite must.

Doc has noticed that just a few storefronts down there is a Mongolian Grill. We eat bowls of mixed vegetables stir–fried with Asian noodles. Doc adds crab and shrimp to his. The meal is delicious. 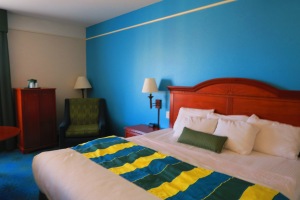 Our hotel for the night is the Rapid City La Quinta and we arrive at 7 p.m. to find that our room isn’t ready. Because I had reserved a room with a king-sized bed, they don’t have any other rooms they can give us. They tell me to come back in 30 minutes. I am annoyed. How can a room not be cleaned by 7 p.m.? Tired and anxious to watch one of the NBA championship games on TV, we drag our bags into the lobby and wait.

Finally we get into the room. It is beautiful with a large turquoise wall behind the bed and brightly colored, Mexican themed watercolors paintings on the wall. I love La Quintas because the rooms are so functional. There is a reading chair with a lamp next to it and an extra large desk with a rolling chair. The room has a fridge, a microwave, an extra large tv, and a full length mirror. Most important, the beds are always fabulous with a thick soft mattress and a fluffy down comforter. We settle in and Doc spends the evening watching basketball. I half watch and I write.