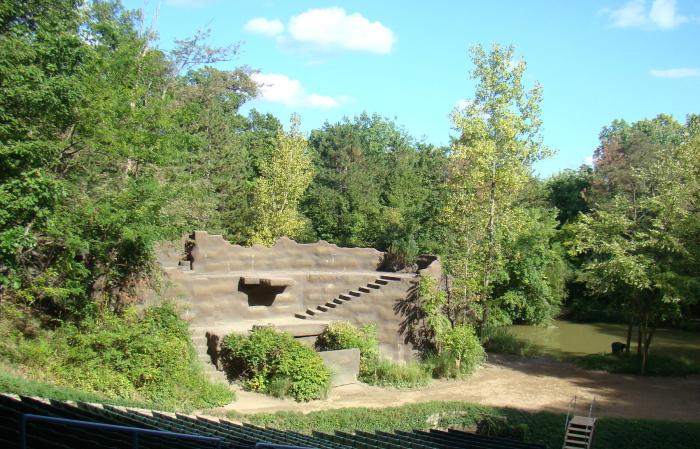 There was no need to take a jacket. It was August and it was still 81 degrees at 8 p.m. when the show “Tecumseh!” began on the outdoor stage in Chillicothe, Ohio. The show, written by Pulitzer Prize nominee and Emmy recipient, Allan w. Eckert,  tells the story of the Shawnee and their final days living in Ohio before the tribe, and many others like them, were pushed out of the state as they watched their numbers being destroyed by constant warring with the whites. It’s one thing to read about Ohio history in school. This show helps to bring that history to life for kids and adults alike. I first saw the production in the early 1990’s. It is still going strong today, playing for three months each summer at the Sugarloaf Mountain Ampitheater. Tickets were around $25 each for adults and about half that for younger children. The natural setting of the stage, surrounded by a thick forest and where a river/lake allows the actors to actually row canoes up to the shore, is fabulous. Singing birds and the changing light patterns caused by the setting of the sun as the show plays along, adds dramatic effect with no effort required from the technical crew.  Parts of the show are both violent and gruesome, but it is showing our history and it probably doesn’t hurt for people to see and understand that. Those scenes are, thankfully, kept to a minimum with just enough blood to make the point. Throughout the rest of the performance, lots of shooting guns, smoking cannon fire, blazing torches and campfires, galloping horses, etc. kept all the grandmas in the audience startled and hanging onto the edge of their seats, and kept all of the kids quiet and enthralled.

I purchased tickets online on a Friday night for the Saturday show.  I was surprised to see that the back few rows had sold out first, but those seats have a roof covering them that would provide protection from any rain that might fall. It would be a smart seat choice if you were buying tickets well in advance before you’d seen a weather report. It is possible to buy rain insurance. But it’s only good if they cancel a show which is rare. There are also add-ons you can purchase including backstage tours which begin about 4 p.m. and a buffet dinner. All I was interested in this time were show tickets. Most of what would be considered the best seats, in the center section, had already been taken. I chose Section 1, Row G, Seats 111-116. These seats are on the aisle as far to one side of the theater as one can sit. But even being so far stage right, they were excellent seats.  We were halfway up the hill and I would not have wanted to be any closer to the stage. Our seats were elevated just enough to see the entire staging area well and our position at the far side of the theater didn’t inhibit our view at all. In fact, being on the far aisle put us close to the action, within an arms reach of the actors and horses as they made their entrances and exits from the stage.

Getting in and out of the theater and parking lot was fairly painless. There were a lot of people, but we took our time and walked steadily to where we were going.  It’s probably better to try to arrive early. We hadn’t taken into account the large number of cars all trying to find a parking spot at 7:30 and traffic was backed up when we got there. They do have volunteers directing traffic which helps. Arriving at 7:30 still gave us a few minutes to investigate the gift shop and find our seats with some time to spare. The actors do not use microphones but they are good at projecting. Someone with bad hearing might have trouble. A few times when the actors weren’t facing the audience it was difficult to hear what was being said. But for the most part, not catching a line or two didn’t make any difference. You still got the idea of what was happening.

That being said, it would, in fact, have been better if some of the dialogue had been cut. The show, especially the second act (which followed a 25 minute intermission) was too long. A true history buff might appreciate all the details. But as entertainment for the general public, I say again that the show is too long (and I AM a history buff). Working at a theater has taught me that it’s always better to leave the audience wanting more. In this case, the show was so long, and many of the scenes so repetitive. that the audience grew restless and I could see and hear people fidgeting in their seats all around me and throughout the theater.

What people are most likely to remember about this show though are the dramatic effects, the stunning scenery, and the wonderful acting that takes our history, usually relegated to the pages of a textbook, and brings it to vibrant, full-color life. There are lots of good non-fiction works about this era of American history. If you’d like something more entertaining though, a great pre or post- show read is a book of historical fiction by James Alexander Thom entitled “Panther in the Sky.”  The book is a well-written novel based on Tecumseh’s life and it does a great job telling the story of the Shawnee in much more detail than could ever possibly be shown in a play or movie. 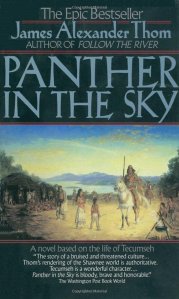