I’ve never considered myself to be a shopper. In fact, I hate malls and large department stores with aisles and aisles of the same products that can be seen at the store next door and the store next to that one. I hate dressing rooms. I hate standing in line at cash registers in stores that never hire enough help to actually take care of their customers promptly. I hate the fact that I need to have and use a store’s credit card in order to get the sale price. I hate that their coupons always have a long list of exclusions when its the exclusions that I want to buy. I hate the long walk from one store to the next, carrying heavy bags and my winter coat because its too stifling hot inside to wear it. I hate huge parking lots and the icy drizzle that seems to accompany each and every mall trip that I make.

What I do like though, is boutique shopping. Those little, independent stores which often carry one-of-a-kind and/or local made goods. And it is well known that I LOVE thrift shopping. Antique malls, flea markets, and Goodwill retail shops are places I have no problem spending an entire afternoon.

That is why I found Lancaster County, Pennsylvania so appealing.  Yes, the entire area is scattered with malls and outlet malls–none of which interested me in the slightest. But if you’re a name brand store or outlet mall shopper you won’t be disappointed.  What did interest me was the large number of small independent shops and antique malls that were EVERYWHERE.  Every town we passed through claimed to have the best antique malls and the best shopping experiences. The choices were overwhelming.

It was October and my daughter, my sister and I decided to make a weekend shopping trip to Lancaster County, For us, the trip was a six hour drive. But the weather was beautiful–warm and sunny, and the leaves were at their colorful fall peak. We left early on a Saturday morning and returned Monday in the early evening, It didn’t begin to give us enough time to check out all of the marvelous storefronts we saw.

We pulled into the town of Lititz at around 2 p.m. on a Saturday afternoon, found a parking spot along the street, and took off walking. Lititz is described as being one of the prettiest shopping towns and it was, indeed, charming. An old fashioned downtown, the street was lined with historic brick and stone buildings which are filled with shops selling everything from candy to kitchen gadgets.

Our first order of business was to get lunch. I had done my research and knew what were the best restaurants in town. But we were all starving and unwilling to take the time to find one of those. Instead, we took our chances and walked into the first restaurant that we came to, a little place called Nino’s Pizza where, fortunately, the pizza was pretty good.

We quickly ate our meal and then hit the shops. A store called “Zest” sold every kind of kitchen gadget you would ever need. “Candyology” had all of the candies you wouldn’t.  We got into a conversation with the cashier about chocolate bars with bacon. She said she couldn’t keep them in stock. Maybe not. But I wasn’t sold. I chose a dark chocolate malted bar instead. There was a bookstore, a gourmet specialty food shop, a pretzel bakery, and a coffee and chocolate cafe. We spent several hours browsing one side of the street and then the other before heading to the La Quinta hotel in Lancaster.

At 7 p.m. we headed downtown to the Fulton Theater where we had tickets to the 7:30 performance of “The Addams Family.” The theater was lovely. We had front row seats in the Mezzanine where the railing in front of us was just high enough to be annoying. We had to sit forward in our seats in order to see the stage. But otherwise, the theater is small enough that there doesn’t appear to be a bad seat in the house. The balcony seats I believe are bench seating, but distance-wise, they are fairly close to the stage and you won’t feel the need to bring binoculars if you choose to sit there. The theater did a good job producing the show. The show itself was awful. I didn’t know anything about the storyline when I purchased the tickets. But with about a zillion episodes with storylines that the writers could have borrowed from the television series, I found it bewildering that this was the best they could do. I was thankful that the show was a musical. Then again, I didn’t find the music particularly appealing either. It’s rare for me to dislike a theatrical production and “The Addams Family” should know that it stands in good company. The only other show that I truly dislike is the hugely-popular “Phantom of the Opera.” 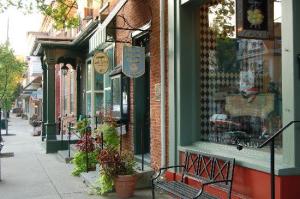 Sunday was full day of shopping. Lots of stores are closed on Sundays and yet, there were lots of places we could have gone. We never got off the main drag though — Rt. 30 running through Lancaster and Paradise. We started our day at the National Christmas Center which I’ve described in another post of its own. Let me just say this place is fantastic and should not be missed no matter the time of year.  It was the highlight of my trip. The rest of the day was spent driving Rt. 30 stopping at one roadside shop and then the next. In one shop we were given samples of “Shoofly Pie.” In another we tried garlic kettle corn. I bought discounted art prints and Christmas ornaments. Between the three of us, the back of the Jeep began to fill up with shopping bags. Dinner was at the historic Revere Tavern where we had chicken salads and were smart enough to share the largest brownie sundae I have ever seen, 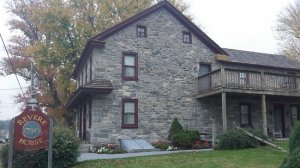 Monday continued the browsing frenzy. After breakfast at Cracker Barrel and a look-see at their own gift shop where I never fail to buy something — this time it was a musical snow globe — we made a quick stop at the Goodwill. From the outside, this huge store looked promising, But this turned out to possibly be the most disorganized and the worst Goodwill store I have ever been inside. We made a hasty exit and drove on to the town of Intercourse where we walked through the Kitchen Kettle Village shops. This place was listed as the #1 destination in Intercourse and while it wasn’t the worst shopping experience ever, it was far from the best. If I had it to do over again I would have probably chosen to go elsewhere. Shops were largely devoted to high end clothing and fashion accessories or other products that I’d seen elsewhere at a lower price. There was a pet store and a “bug” store. I bought fudge in a fudge shop where we stopped to watch a woman stirring it up on a large table.  Kettle Village had a nice parking lot and large clean restrooms that were easy to find. I was told that a local restaurant, the Kling House, is tops. The most interesting stores were across the street where I found a beautiful pair of many-colored fingerless gloves and a fabulous fabric store.

In addition to shopping, the Lancaster area is filled with other attractions. Many Amish experiences are available including Amish house tours and buggy rides. There is a miniature horse farm, a railroad museum and a train ride. But the real draw is for the shopper. Any kind of shopping you’re looking for is available. And a weekend won’t begin to be time enough to visit all of the interesting looking shops you’ll see as you drive from one small town to the next.