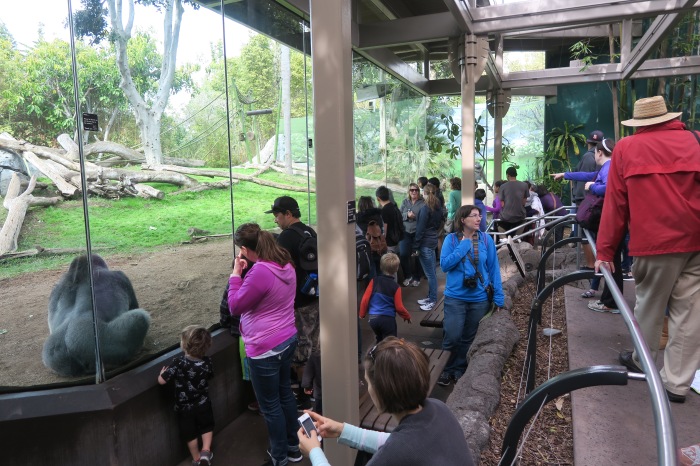 I don’t remember the first time I visited a zoo. What I do remember is the excited anticipation of seeing wild animals that you were never going to see in the wild. That, and the endless searching, in treetops and at the back of dark, man made caves, behind boulders, and around hidden corners, searching and hoping for a glimpse of one elusive animal after another. Zebras were always easy to see. Camels too were never far from the fence. Or flamingos. Or the deer. I’m sure it was mostly because those animals were in pens and cages that were way too small for their comfort and mental well-being. You always saw them because they had nowhere else to go. 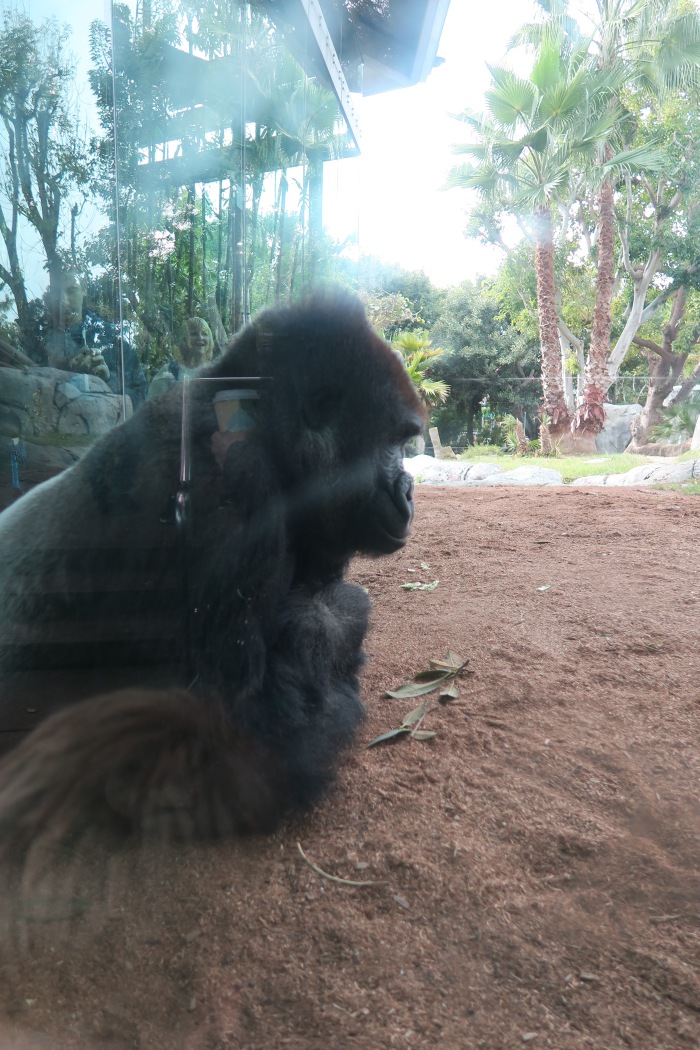 But then there were those elusive ones like the large cats who, no matter how small their penned in area was, they never failed to hide just out of site in that single patch of tall grass at the back or behind the giant fake rock. Someone might spot the twitch of a lion’s tail and then the entire audience would be mesmerized, staring hard at the golden hairs in hopes that the rest of the animal would miraculously come into view. But usually he didn’t and eventually the spectators-those parents pushing strollers and grandmas following after school age kids sticky with cotton candy and gum-would move on in hopes of catching a glimpse of the polar bears or the gorillas at the next stop. 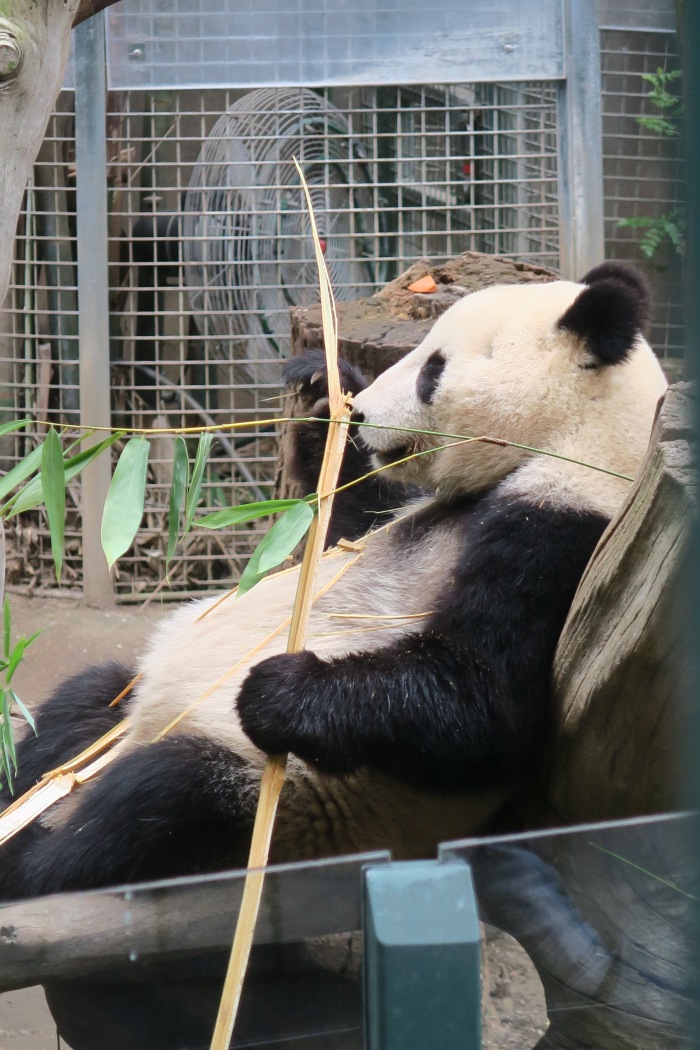 Zoos sure have come a long way.

We arrived at the San Diego Zoo shortly before noon. Because of the Martin Luther King holiday, the line to buy tickets was long. My daughter, Amy pulled out her cell phone and ordered tickets for our group online. It allowed us to skip the first long ticket line and move directly to the turnstiles. A worker scanned my daughter’s phone and the nine of us pass through with little delay. 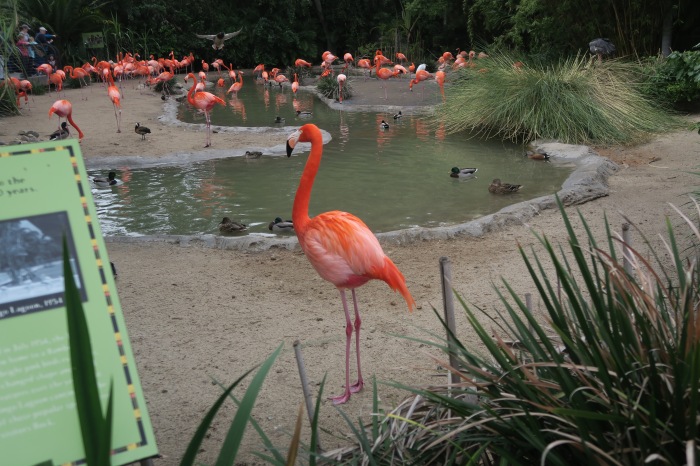 Our first order of business was to have lunch. We wound our way through lush tropical foliage to the Tree Top Café where the menu consisted of typical sandwiches, burgers and hot dogs. There were a couple of basic pasta offerings. John and I chose the Chicken Parmesan. We managed to secure a large table outside where we could all sit around and enjoy a meal together. Here it was mid-January, and we were dining outdoors wearing no more than light weight sweatshirts.

The San Diego zoo is a beautiful park. The word beautiful doesn’t do it justice really. Every square inch has been thoughtfully planned out and planted with rich greenery or pretty flowering plants. More attention is paid to the health and well-being of the animals on display, while at the same time enclosures made of crystal clear glass make it easier than ever to see wild animals up close. A $50 admission ticket allows you to ride the aerial tram, the kangaroo express bus, and also take a guided bus tour which is a nice way to give your feet a break after several hours of walking.

We watched one of the small cats catch fish for his dinner; guerrillas sat next to the glass, doing their own people watching; a panda laid leisurely against a log munching on bamboo as if he hadn’t a care in the world; a polar bear worked diligently to retrieve his dinner from inside a plastic barrel. A large cat peered down on me from his perch on a high rock. I watched his eyes watch my eyes. We stared at each other for a long time. I don’t know why he was so interested in me. Unless, perhaps, he was thinking about lunch. 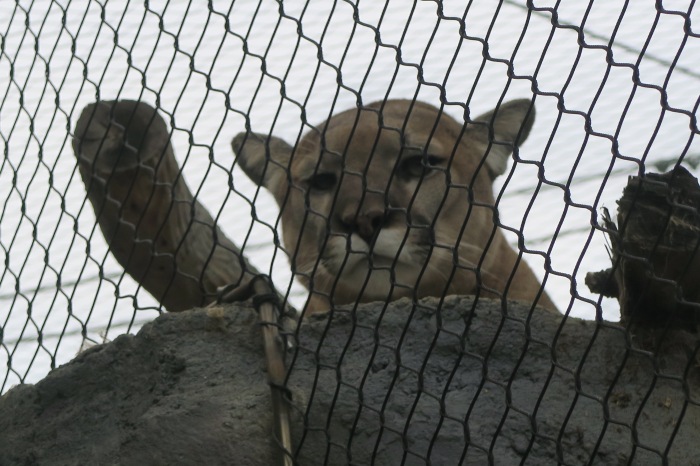 I’ve always had an ethical resistance to zoos. Keeping wild animals in cages seemed unnatural and even cruel. But with zookeepers now focusing not only on the health of the animal, but on their happiness as well, life for these amazing creatures, mostly rescued animals , no longer seems so bad.  And if these captive animals can serve as ambassadors for their counterparts in the wild, well, maybe some good can come of it.

This was the most expensive zoo I’ve ever been to. But the San Diego Zoo is a world leader in animal conservation with ongoing programs throughout the world. If the cost of my admission ticket helps to save or make life better for animals both at the zoo and in the wild, it’s money well spent. 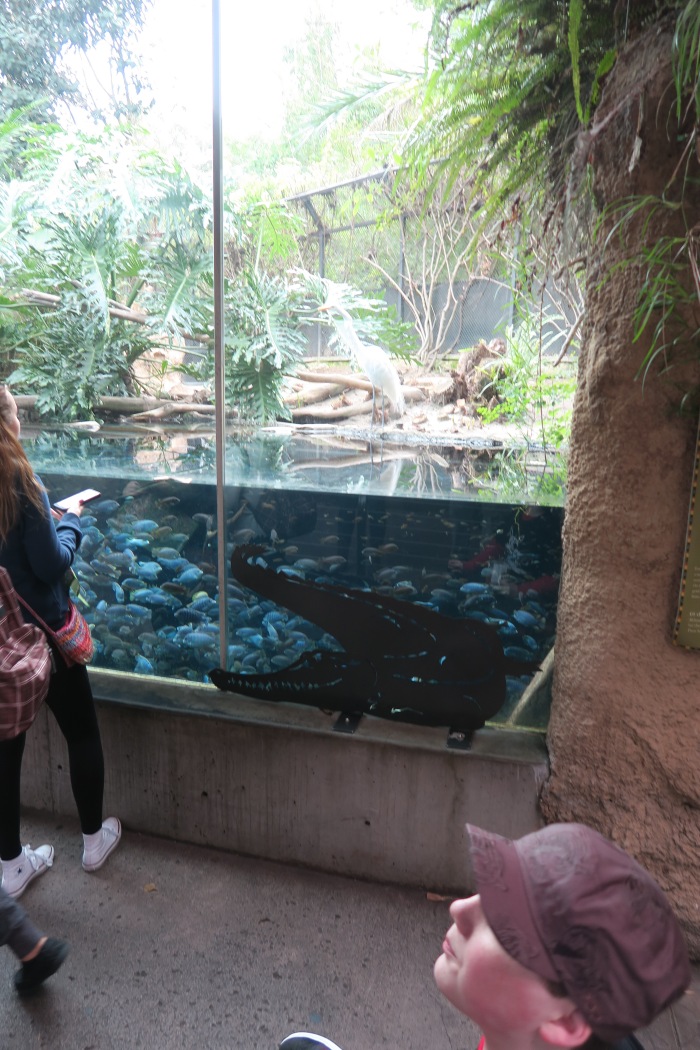