A part of my Four Corners Vacation 2011

We pulled into the town of Bluff at dinnertime.

“Town” is not really an accurate word to use when describing Bluff. When I think of a town, I expect to see a Main Street lined with brick building businesses such as a hardware store and a bank. There should be a drug store on the corner. Maybe a strip mall. And no town these days seems to have escaped the intrusion of at least one Dollar Store.  But not in Bluff. Bluff, Utah, thankfully, is far from being a modern town. It sits in the middle of the desert, hanging on to on Utah’s southern edge like a fly caught on the windshield of a moving car. Its few short streets are about the width of a driveway but you’re not likely to pass another car so it doesn’t much matter that they aren’t really more than one lane wide. There are a handful of old houses and a cemetery. There is even a tiny history museum. What seems out of place is the handful of independent motels and B&B’s. Who would vacation in Bluff? Whitewater rafters, back country hikers and a couple of history buffs are apparently enough to keep the doors in town open. John and I had three days of our Four Corners vacation scheduled in this dusty, no-man’s-land.

For any who don’t already know, my husband is writing a book based on the journals of his great great grandfather, Francis Asbury Hammond. His first book, Island Adventures is set in 19th century Hawaii where Frank served as a Mormon missionary. It has been published by Signature Books. The next book in Signature’s pipeline has Frank returning to Salt Lake City where leader of the church, Brigham Young, sends him to open a new settlement in Bluff, a remote and isolated place in the 1880’s. John and I were there to follow in Grandfather Frank’s footsteps, and get a feel for the land. It appeared that not much has changed.

But first things first. It was dinnertime and we were hungry. We pulled up in front of the Twin Rocks Café. The Twin Rocks takes its name from two tall rock spires that tower behind it. You can’t miss it. It is the only café in town so we were destined to eat every meal here for a few days. Lucky for us, the food was good. 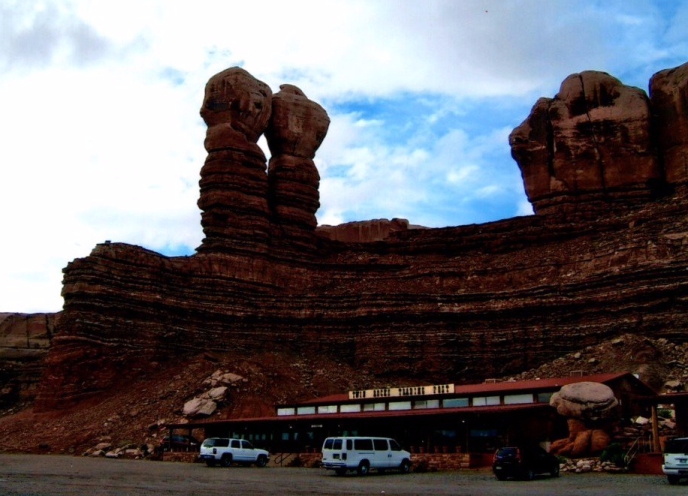 The Twin Rocks was bright, clean, and cheerful; the waitresses were nice and the food was reasonably priced. The breakfast burrito was the best thing ever and it was big enough for two. The canned vegetables with our evening meals were usually too soft and bland but that’s the only bad thing I can say about the place. Customers were few that first evening (as I suspect they are every evening). We chatted awhile with the owner and quickly made a new friend.

After dinner, we drove up a nearby hill to the cemetery. It wasn’t hard to find. With no trees to block the view gravestones are visible from the town below. We found the graves of John’s ancestors and their neighbors whom we had been reading about in Grandfather Frank’s journal. Growing up in Ohio I was used to cemeteries full of stone monuments lined up on neatly manicured green lawns. This desert cemetery was very different. There were some modern-day monuments. Others were simple, handcarved stone erected more than 100 years ago. Some graves were outlined with round rock. Although it was a dry and dusty grass-free environment, all were cared for by people of the town.

From the hilltop cemetery we could see the San Juan River flowing along the southern edge of Bluff. It was a source of water for grandfather Frank’s early settlement as it was for generations of ancient people who lived along its shores. Today, the river has found a new purpose – recreation.  The one thing that does draw visitors to Bluff is the San Juan River where several river rafting companies are now based.

Wild Rivers Expeditions has been guiding the adventure seeker down river for fifty years. I am not a fan of white water. But I don’t object to a gentle float trip and so one of our days in Bluff was spent floating on the water and taking in the stunning scenery.  Our guide was Navaho. He took us to an ancient cliff dwelling that is difficult to reach except from the river. We climbed up into the stone home and found tiny corn cobs in a storage space, the tasty kernels eaten long ago by some foraging critter. Painted pottery shards littered the ground below. He showed us petroglyphs on the sides of smooth rock walls. Our guide pointed out different plants along our route and explained how his Navaho grandmother had used them. From one she made brooms and hair combs. From another she brewed a tea.

We stopped and watched a herd of bighorn sheep grazing on a hillside. At another spot our guide pulled our raft over to some reeds and he cut off several and placed them on the floor of the raft. As we floated along he folded and bent the reeds into shapes and made a different animal “toy” for each one of us. Near the end of our quiet ride we suddenly began hearing music. The sound echoed through the canyon. It was so loud that those of us in the front seat of the raft thought the sound was coming from loudspeakers placed somewhere on the shore. When we turned around we saw that the music was coming from our guide who was playing a simple wooden flute. The acoustics of the surrounding rock amplified his tune. 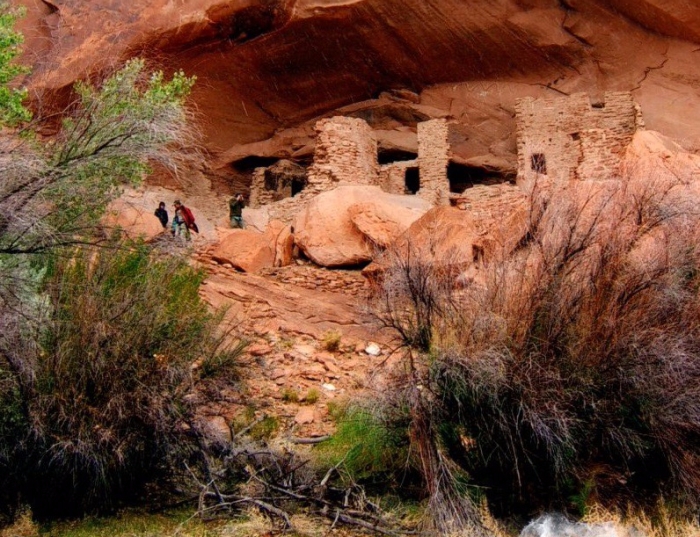 The Decker House Inn is listed on the National Historic Register and located in the “historic district” of Bluff. John and I had booked our two nights there. I had not been able to book a room there for first night however so we stayed in one of the local hotels. Although I am often skeptical of independently run hotels, never knowing what I’m going to find, the Desert Rose Inn turned out to be a great place. We had a cute little cabin with a queen bed and wood paneling throughout. I’d have happily spent all three nights there.

The Decker house was a great place too. It wasn’t hard to find. We looked for a few short streets where the houses stand and drove around for about a minute until we found it. The five rooms in the Decker house are non-smoking with private entrances and private bathrooms. A full-sized guest kitchen is available for use in the evenings. The lounge is a great place to relax with a book, play card games or research the area. The inn had wireless high-speed Internet. Our room had a television and a mini-refrigerator. It was decorated with antique furniture. The bed was comfortable.

In the morning we stepped into the dining room for breakfast where we met our hostess and fellow guests for the first time. Breakfast consisted of a farmer’s casserole which was delicious. I have since found the recipe online and make it often. We were served delicious breads with homemade jellies and a selection of fresh fruits. Another couple joined us at the table. They were professional bicyclists who had just completed a multi-day race. They were in Bluff to do some rafting and relaxing. As we were talking and all getting to know one another, John and our hostess discovered that they both came from the same small hometown in Idaho. Only a few years apart from each other in school they grew up knowing many of the same people. They spent a long time swapping stories until the morning began to fade away and we needed to be on our way.

We spent a long time at our visit to the Bluff Fort. Not really a fort in the traditional sense, it is a small log building with a small visitor’ s center museum. There were one or two covered wagons on display outdoors. Still, it is remarkable that such a tiny town would have this kind of a place. The credit goes to the Mormon historians who keep it going. Inside we found lots of memorabilia including some old photos. The workers were friendly and anxious to tell stories of their history and hear those that had been written by grandfather Frank.

Most tourists will overlook Bluff and that is understandable. It’s an easy place to overlook. Early settlers cried when they saw the place even as they went to work to build their new homes. I don’t know that I will ever have a reason to go back again. Nothing much happens there and there are so many other places to go that I have not yet visited. But our three days in the laid back little town was a memorable visit. It was a great place to spend some quiet time and meet some nice people. It’s easy to see why the residents who live there want to stay.