I had the most difficulty choosing a tour in Florence. Each that was offered by NCL had something spectacular that I would have loved. But my husband had his heart set on seeing the Uffizi again and this was the only tour that offered that particular museum.  If we had it to do over again, we would have paid for the bus transfer from the ship to Florence and Pisa and done the touring on our own.  Yes, the transfer alone offered by the ship is expensive, but it is less expensive than the guided tour and with Florence being so far from the ship, it would have given us peace of mind while letting us tour the city at our own pace. That, in fact, is exactly what I’d planned to do at one point and I’d even tried to go online and order tickets to the Uffizi. However, I found it was impossible to get tickets to the Uffizi at any period of time when we would be in the city. I could get early morning tickets or late afternoon tickets only. I guess the ship’s tours had purchased them all already for the mid-day times that we would be there.

When it came to walking, this was the hardest tour day we had. There was A LOT of walking. And after all the walking we did in Naples and Rome, I was really glad to have brought two pair of good walking shoes on this trip, that I switched out from day to day. I’ve seen all sorts of advice on how to lighten your luggage, but let me tell you, a second pair of walking shoes is worth its weight. Even shoes that are well worn and comfortable can rub you the wrong way when you wear them day after day for long walks. Switching from one good pair of shoes to another each day alleviated any of those problems. My feet were tired by the time we arrived in Livorno, but at least I didn’t have to worry about blisters. 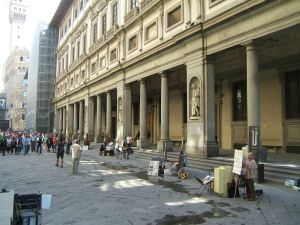 Boarding the tour bus, we drove first to Florence and stopped at an overlook to see a fantastic view of the city. I felt that we spent too much time here but it did give everyone a chance to use the restrooms which were a short walk down the street but somewhat difficult to find. From there, we were left at a drop off point where we made our way via a long walk to the Uffizzi Gallery.  On the way we saw the Ponte Vecchio but we never had the chance to walk across it. At the Uffizzi, we had tickets for 11 a.m. First we were left to stand around waiting while our guide to pick up our tickets from the ticket window.  There were artists set up all around a square and it was interesting to watch them paint. We then moved toward the Uffizi’s entrance but because we were early, we had to stand around waiting for about 20 – 30 minutes until our ticket time arrived. It wasn’t an uncomfortable wait, but it felt like very bad time management. We could have easily spent a few minutes at the Ponte Vecchio and still arrived at the Uffizzi in time to enter. 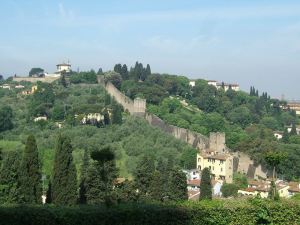 Once inside the museum our guide led us to many highlights and described each one. The museum is filled with fantastic works and there is no way to see them all but we did see many interesting pieces and it’s always nice to have a guide to point out the best and tell you a little bit about each one. We did do a lot of walking inside the museum. We did more walking here than any other place we visited on this trip and even though it was the beginning of the day, it felt like it was a bit much.

A replica of David

Leaving the Uffizzi, we walked through Signoria Square where we saw “The Rape of the Sabine Woman” and a replica of “David.” While this isn’t the actual “David,” it is the spot where “David” was originally displayed which, in my opinion, made it more interesting that than if we had gone and seen the real thing.

We next walked to a gold store — the obligatory shopping stop where restrooms are available. There was no pressure to buy anything or even stay in the store, and we were given free time at that point for lunch. Two plus hours for lunch however, was too long and could have been better spent touring. We found a pizza shop and had a couple of slices and then we walked around a nearby crafts market. Not being a shopper though, and not being given any maps or information about the area, we found the time pretty boring. If you have a guidebook you shouldn’t have this problem (I had forgotten to throw mine into my bag that morning) and you would be able to use that two hours to find your way to some interesting stops.

Meeting back at the gold store, the group walked about 10 minutes to the Duomo and the Baptistry which we viewed from the outside. Although it wasn’t scheduled on this tour, our guide gave us 10 minutes of free time because several of us wanted to go inside the Duomo. One of the arguments against taking this tour was that it wasn’t going to allow us time to climb the Duomo’s tower. A long and challenging climb, it’s something Doc and I both would have loved doing. Instead we had to settle for a hurried trip inside the church where we looked up to see the grand painting on the dome. Even from the floor, you get a real feel for how scary it must have been painting that high!

From the Duomo, we made a long walk back to the bus and drove to Pisa. Again, it was a fairly long walk from the parking lot to the leaning tower. There’s not much to see here unless you want to climb the tower but if there’s a line, you won’t have time. You can enter the church but you need a ticket. You can get the ticket for free in the building across the walkway. There was also a line of kiosks along the street selling postcards, t-shirts and other souveniers. Again though, since we weren’t staying long enough to make it possible to wait in line and climb the tower, we were left here for too long on our own. 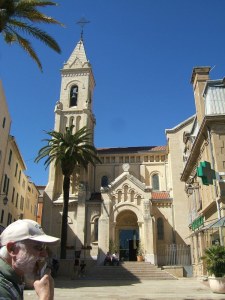 This was the most disappointing of all the shore excursions we booked through NCL. The walking to get from place to place took up nearly all of our tour time and we really saw very little of the city. The Uffizzi and Leaning Tower were both great sites to see and I’m glad we saw them, but the day could have been much better organized. We’d have seen and done more if we had been on our own.  Florence would be a great city for doing on your own too, because it is so compact and walkable. Most every place you’d want to see is within walking distance. 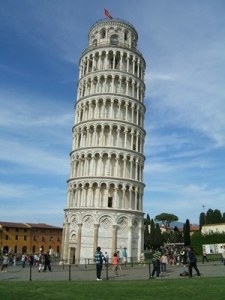 The Leaning Tower of Pisa

One thought on “NCL Cruise to Livorno, Italy: “Exclusive Pisa and Florence with the Uffizi Gallery””